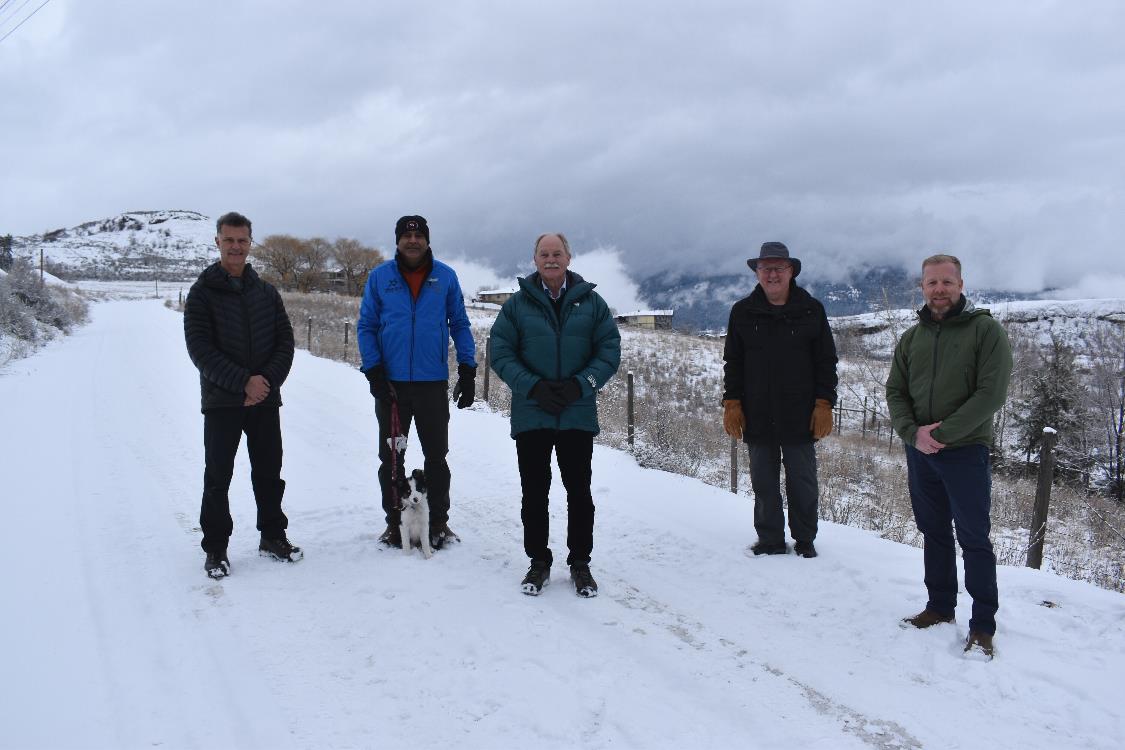 The City of Vernon and Regional District of North Okanagan (RDNO) are pleased to announce a new connection has been made possible for the iconic Grey Canal Trail, thanks to a recent land sale agreement with Westco Properties Inc.

The agreement includes the dedication of 4 acres of park land along Davison Road and 3.6 acres of trail right of way, connecting the Turtle Mountain section with the Bella Vista/Okanagan Hills section of the Grey Canal Trail. The park land will be used for City park and open space, while the trail land will be part of the RDNO sub-regional trails network.

This acquisition is notable for the Grey Canal Trail, as the land for the extension was one of the last remaining privately-owned portions along its route between Okanagan Hills Blvd and Coldstream Valley Estates. If all connections are able to be made, the trail would be a continuous 35 km route to explore by foot, bike, or snowshoe throughout the year.

“Earlier this year, we received a $110,000 grant from the Ministry of Tourism, Arts, Culture & Sport and the Thompson Okanagan Tourism Association to develop this section of the trail and install interpretive signage. Now that we have attained ownership, we can put the grant to use and begin trail development in the spring of 2022,” said Akbal Mund, Chair of the Greater Vernon Advisory Committee.

The City of Vernon worked cooperatively with the owner and developer of the land, Westco Properties Inc., and the RDNO, through the OCP, rezoning and subdivision process to help facilitate the dedication of the parkland and acquisition of the trail connection.

“We at Westco Properties are pleased to have given the City of Vernon and the RDNO the opportunity to complete this section of the Grey Canal Trail and also introduce more park area within the City,” said Greg Herfst, Owner, Westco Properties Inc. “We see this as an important part of the overall development plan, which will also include the Tassie Creek walking path and wetlands, ensuring the protection of this environment for future generations.”

Once both the park and trail are improved, it’s anticipated they’ll be well used by residents of the development, neighbouring communities, trail users and visitors.

History of the Grey Canal Trail

The Grey Canal was built by Lord and Lady Aberdeen. In 1905, they began an extensive project to move water from lakes on highlands southeast of Vernon, across the Coldstream Valley, and along the benchlands that circles Vernon, Swan Lake to Okanagan Lake. It was completed in 1914, at a cost of $423,000. The Grey Canal played an important role in the sub-division of ranchlands and orchards.

Today, portions of the Grey Canal Trail are used for hiking, biking, horseback riding and snowshoeing. The original route of the Grey Canal is still visible as horizontal lines carved into the hillsides above the valley. As you explore the route, you may discover the remains of the canal and its elaborate system of ditches, pipes and flumes.